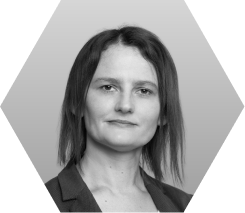 She defended her master’s thesis in chemical technology at the Szczecin University of Technology in 2005, in 2009 she obtained her Ph.D. degree at the same university. She obtained a postdoctoral degree in chemical sciences at the Warsaw University of Technology in 2017. She completed a postdoctoral fellowship at IFW Dresden, Germany, as a scholarship holder of RTN Marie Curie and the Alexander von Humboldt Foundation (2009-2012). She worked as a Research Professor (2013-2015) at Sungkyunkwan University, Suwon, South Korea. Since 2013 she has been conducting research on the production and characterization of two-dimensional materials, including graphene in cooperation with Polish and foreign research units. From 2015 she is a visiting professor at Soochow University, Suzhou, China. Winner of the Ministry of Education’s scholarship for outstanding young scientists (2016), implemented 3 research grants (Alexander von Humboldt, FNP Homing Plus, NCN Sonata). Currently, the manager of three research grants from the National Science Center, FNP and National Center for Research and Development. 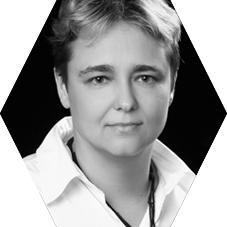 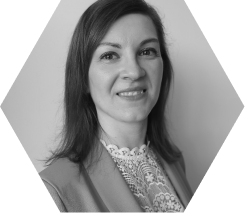 She is a graduate of master studies (2009) and doctoral studies (2016) in the field of Chemistry at the Faculty of Chemistry of the Wrocław University of Science and Technology. In 2016–2019, she completed 2 postdoctoral fellowships at the Iowa State University in the USA and the Stockholm University in Sweden in the group of prof. Anja-Verena Mudring. She participated in 7 research projects in Poland and abroad, of which she was the principal investigator in 2 of them. She is a co-author of 21 scientific articles and 2 patents.
Since 2014, she has been working at the Łukasiewicz Research Network – PORT Polish Center for Technology Development (previously Wrocław Research Centre EIT+), and since 2021 she has been the chief specialist in the Advanced Materials Synthesis Research Group. Her research interests are focused on the synthesis and characterization of materials with luminescent and thermochromic properties. Currently, she is the principal investigator in a project whose aim is to obtain a thermochromic paint intended for labeling frozen food packages. The project is financed by the National Center for Research and Development within the 11th edition of the Lider Program. 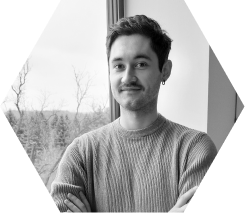 Graduate of master studies in the field of Medicinal Chemistry at the Faculty of Chemistry, University of Wrocław. Co-author of scientific papers, published in the journals of JCR. Taken part in 6 research projects, and 2 are currently continued. Since 2019, he has been working at the Łukasiewicz Research Network – PORT Polish Center for Technology Development. His main work experience concerns development new micro- and nano-scale powders doped with Nd3+, Yb3+ and Eu3+. What is more, taking advantage of these ions as structural probes using the high resolution spectroscopic tools.
He is a laureate of the Internal Contest „Studencki Nobel 2021” organised by Niezależne Zrzeszenie Studentów in category of and Science and Energy Technology , Poland. Chairman of International Conference Prequel Symposium on Advanced Technologies and Materials /PreATAM 2020/, PORT, Wrocław and a member of Local Organizing Committee 8th International Symposium on Optical Materials (IS-OM8), Wrocław. Currently his passion for science is being developed as studying a PhD degree at the University of Wrocław in close cooperation with Łukasiewicz – PORT. 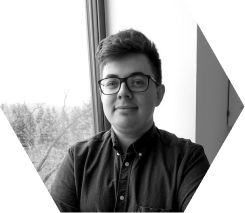 Graduate of master’s studies in the field of Medicinal Chemistry at the Faculty of Chemistry of the University of Wrocław. Since 2020, member of the Advanced Materials Synthesis Group in Łukasiewicz Research Network – PORT Polish Center for Technology Development. Currently, he is broadening his scientific horizons by conducting research on modern temperature sensors as a Ph.D. student at the Faculty of Chemistry of the University of Wrocław and at Łukasiewicz-PORT. Co-author of 1 scientific publication on the spectroscopy of the Nd3+ ion in the YPO4 matrix. The research results on this compound were presented at international conferences in Wrocław and Nice. His main scientific interest is lanthanides spectroscopy and temperature-dependent sensors. He participated in 5 research projects financed by the National Science Center and the National Center for Research and Development, of which he works in 3 to this day. Member of Local Organizing Committee of 8th International Symposium on Optical Materials (IS-OM8), Wrocław and Secretary of the International Conference Prequel Symposium on Advanced Technologies and Materials preATAM 2020. 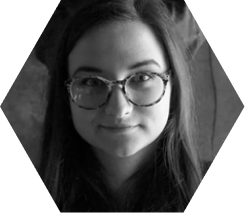 A graduate of master’s studies in the field of Chemistry, specialization: Chemistry of materials for modern technologies (2020) at the Faculty of Chemistry of the University of Wrocław. She is carrying out a doctoral thesis in the field of natural science in the discipline of chemical sciences at the Faculty of Chemistry of the University of Wrocław as part of the Implementation Doctorate program. She participated in the 6 research projects financed by the National Science Center, National Center for Research and Development and the Foundation for Polish Science. Holder of Minister’s scholarships for students for outstanding academic performance. The co-author of 3 scientific publications. From 2018, member of the Advanced Materials Synthesis Group in Łukasiewicz Research Network – PORT Polish Center for Technology Development. Her research focused on luminescent active layers for use in photonics based on doped sol-gel materials and the synthesis of compounds and materials with specific luminescent properties. Member of the IS-OM8th conference organizing committee and Secretary of the Young Scientists Section ATAM2022 and preATAM2020.